It is generally accepted that the first recorded discovery of gold by the white man occurred in 1799, in Cabarrus County, North Carolina. Conrad Reed, a boy at the time, found a 17-pound nugget in a creek on his father's farm. Incredibly, the family used the huge nugget as a doorstop until 1802, when it was sold to a jeweler for $3.50. Eventually word got out about the true worth of the gold doorstop, initiating the nation's first gold rush. 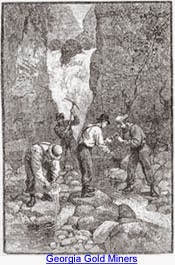 The Georgia portion of the Appalachian gold belt went unappreciated until Benjamin Parks discovered gold in 1828, in the area near which the town of Dahlonega would be settled.

Actually the first gold rush town in Georgia was called Nuckollsville, later becoming Auraria (from the Latin, meaning "gold"), which was located about six miles from present day Dahlonega. The gold discovery caused a near stampede of those seeking a quick fortune. The region near Auraria lay claim to one of the richest parts of the gold belt and many miners sought their fortune there. The area was named Lumpkin County in 1832 and Dahlonega was selected as the county seat in 1833, denying Auraria her claim to the title, and initiating the decline of the state's first gold rush town. This area had been home to the Cherokee for many generations. They were later forced by the government to leave their land for reservations in Oklahoma, a journey that became known as the "Trail of Tears."

The gold rush was exacerbated by a state-sponsored lottery, which awarded forty acres of gold-bearing land, previously owned by the Cherokee, to those holding the winning draws.

Parks may have best described the chaotic scene, "The news got abroad, and such excitement you never saw.  It seemed within a few days as if the whole world must have heard of it, for men came from every state I had ever heard of. They came afoot, on horseback and in wagons, acting more like crazy men than anything else. All the way from where Dahlonega now stands to Nuckollsville there were men panning out of the branches and making holes in the hillsides ."

Dahlonega was aptly named, being derived from the Cherokee language, meaning "yellow money." In her earlier days known as "Licklog," Dahlonega soon became a boomtown, supporting a surrounding population of about 15,000 miners at the height of the gold rush. Symptomatic of its rapid ascension, shortages of common necessities were widespread. As might be expected in such a "rough and ready" gold mining town, there were stores, hotels, brothels, saloons, and gambling houses.
One contemporary account related, "I can hardly conceive of a more unmoral community than exists around these mines; drunkenness, gambling, fighting, lewdness, and every other vice exist here to an awful extent." "Sprawls Hotel," a tanyard in town, was an "establishment" where drunken miners were allowed to "ooze" until they were sober enough to "check out." On the other hand, one traveler thought that the Dahlonega hotels offered "comforts for the inner man...not excelled by any in the State."

Gold production increased in the decade following the gold discovery. The problem that the gold miners faced was that there was not an easy way to convert their finds (gold dust and nuggets) to a spendable medium. Raw gold could be used for payment in the local establishments near Dahlonega, but usually at a steep discount. Part of the difficulty was that the fineness of the raw gold was not easily determined. A few private coiners, including Templeton Reid, attempted to alleviate this problem, with only minimal success. Reid was a German "metal worker, cotton gin manufacturer, jeweler, watchmaker, and gunsmith" who briefly issued $2, $5, and $10 gold pieces  dated 1830, initially from Milledgeville, then from Gainesville, Georgia. It was an arduous and risky task to attempt to have the raw gold coined at the Federal mint in Philadelphia,
as the distance from the southern gold fields was long and uncertain. Nonetheless, the mint at Philadelphia did receive over $1.7 million in Georgia deposits from 1830-1837.
Автор: Jackkat на 2:08 AM

Email ThisBlogThis!Share to TwitterShare to FacebookShare to Pinterest
Ярлыки: The Georgia Gold Rush